Born in Ohio in 1827 to parents who put a high value on education, Annie was educated far more than most girls of that time. Her marriage to William Wittenmyer at age 20 ended with his

passing when she was 33. Left with more than adequate funds to support herself and her family, Annie began to take on many social causes related to the Civil War and to education, some of which were not well-received by her male counterparts. Her life as a social reformer will unfold in this presentation as will the other avenues of success she achieved in her personal life. And you will learn why an article written about her in the Davenport Democrat and Leader newspaper (February 3, 1900) was titled “A Great Work Done”.

JudyAnn Morse, a public speaker for many years as both a fund raiser for a national convention grounds and as a long-time pastor, brings with her a wealth of information on many subjects. She has been married to Delbert Morse for thirty years, and is a mother of three sons and stepmother of five children. She is also a grandmother and great-grandmother.

Most recently, she has authored a book of sixty devotions titled SIMPLE SIGNS OF GOD’S LOVE. JudyAnn enjoys spending time with family and friends, reading and writing, listening to music and sitting on the porch. She and her husband live in Burlington, Iowa. 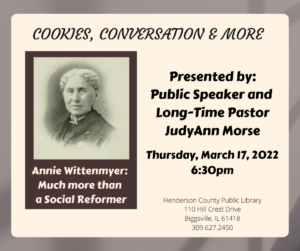